The Cactus Miklat Daypack - 22 years on

I am lucky that my personal design ethics have persevered at Cactus, a company I started in 1992 as a teenager and still retain a small shareholding in over 25 years later.

Our mantra was "Gear that wears in not out" and as time passes it is intriguing to watch how products conceived with that intention stand up in the modern world of ubiquitous consumption and "All things available all the time".

Had a guy turn up the other week with one, Needed a new zip. UV all to buggery was at least 20 years old.

In early 2019 I was contacted by the NZ Wilderness Magazine to comment on the Miklat daypack for a feature they were doing on iconic outdoor products:

What inspired the Miklat pack?

I think daypacks are quite personal bits of equipment, outdoors people often use them everyday, to ride to work, walk to school, hike in the weekend or pop out to the dairy. With this in mind we really wanted to make a pack that stood up to that sort of continual use and was a reliable companion.

Could you explain why you opted for such a simple pack?

As a designer I believe simplicity is appropriate in outdoor gear design, as the gear gets used, and stressed, in all the ways you imagine and many you can't foresee. As we manufacture in NZ we have always had the restriction of labour cost to drive design as well, which I think has been a positive pressure on how we considered our products.

Was durability/being "bomb-proof" a big part of the design?

At Cactus it has always been a principle part of what we do. We believe if someone is going to invest in us by buying our products we sure as hell better give them something that exceeds their expectations.

How was the pack designed, in terms of its comfort and fit?

At the time people were starting to do some pretty fruity complex shapes. As well as working at Cactus I was starting to work as a ski patroller and using a pack daily to carry heavy explosives and with gloved hands really made me appreciate the simple straight sack and lid pattern versus tapered sack and zip designs. I still think it's the cleanest and most comfortable form for a flexible use daypack, easier to get stuff in an out of and most waterproof.

How/why did you choose the materials you did?

Canvas has a special place in kiwi outdoor pack design. Now with a surfeit of lightweight products around it seems an anachronism but at the time there was no fabric that offered the strength add water resistance while being nice and tactile in daily use. I actually still think there isn't anything out there that beats it even now.

Has the pack gone through any upgrades since it was first released? If so, what?

I ... don't think so...maybe we did some without compression straps initially..but it was so long ago!

Why do you think it has been a successful product?

The intention was clear as to what we wanted to make and people see that. We also haven't changed it un-necessarily so people have been able to see them over the years and realise they need one too. I really believe this constant attempt to evolve that which is already close to perfect is a mistake and pretty exhausting to the consumer. 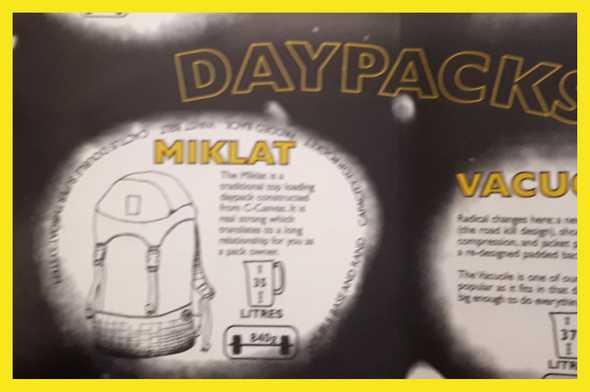